Following feedback from recent system testing I looked into a performance issue in my .NET based DSL interpreter. The interpreter coverts the travel industry DSL into .NET CLR calls through reflection.

This chained approach resulted 2000 iterations and took 5 seconds to execute.

I assumed that reflection was the problem so I reran my performance unit test after adding caching to my ExpressionTree. I was surprised to learn that the improvement was negligible (from 5.1 seconds to 5 seconds). The intention was to reduce the number of reflection calls based upon “common wisdom” that reflection is slow.

I then ran the VS2008 Performance Explorer/Wizard over the interpreter and spotted that a derived String.Concat method was using up the majority of working memory at runtime. I fixed this in the heaviest used method which tokenises the script before passing it to the expression parser (replacing a simple activeToken += currentChar style approach with a StringBuilder.Append(currentChar) approach).

There were some interesting results...the following unit test demonstrates how a pre-initialised string builder can introduce a MASSIVE improvement in runtime speed. String concatenation is extremely slow, the string builder extremely fast and the reflection calls (contrary to common wisdom) are in fact really fast. 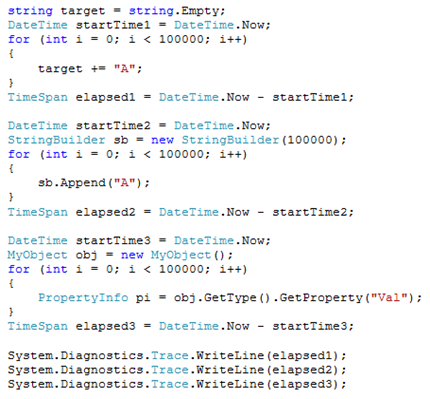 Jon Simpson
I have been a developer, DBA, architect, EAI specialist and end user of Microsoft platforms and tools since I left University. This wasn't neccessarily by choice; more a case of developing on the toolset that was put in front of me and taking the path of least resistance simply to get the job done. I am now a technical architect within the travel industry designing and building systems on Microsoft platforms.